The Curse of Teams Live! 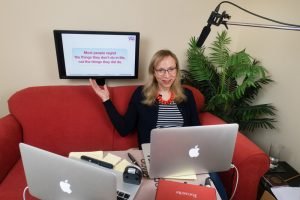 I suffered the curse of MS Teams Live today…
Having delivered some trans awareness training during Pride month to staff at Enfield Council, they booked me again to talk to 100 of their senior leaders (via an ordinary Teams meeting) last week and to 322 of their middle-managers today via Teams Live (as there were so many people).
Technology is always the most volatile aspect of remote speaking as there is so much that can go wrong. Last week’s event went without a hitch, but I am always a bit nervous when I use Teams Live as it can be very temperamental. In its early days there would always be problems with external speakers being able to log in to meetings, but Microsoft seems to have solved that now. Today however, I encountered a new problem for me. I was halfway through my talk when I was unceremoniously booted out of the meeting. I wondered if it was something I said, but I was assured it wasn’t! With 644 eyes eagerly waiting for me to log back in, they had to fill the time, so they decided to go onto the next item on their agenda before I was able to resume the second half of my session. It all worked out well in the end and I received some lovely feedback.
Remote speaking is not for the faint-hearted!
#transawareness #remotespeaking #lgbtqiaplus #transgender #trans #diversityandinclusion #diversityequityinclusion #diversityequityandinclusion #Pride

Katie Neeveshttps://cool2btrans.co.uk
I am a woman on a mission! But not just any woman and not just any mission… Being an openly transgender woman and a trans ambassador, I am on a mission to not only show that it’s OK to be trans, but it’s actually cool to be trans too!
Previous Post
Fellowship of the RSA
Next Post
Final trans awareness training session of 2021

I have just delivered a trans awareness talk at the University of Leicester as part of LGBT+ Histories Month.  Like other participants in LGBT+…

It’s been a busy day again today as I did a virtual trans awareness “Lunch & Learn” session for staff at Ofcom, closely…